In Delano, Calif., Kern Valley State Prison is barely visible from the main road, a low-lying cluster of buildings hidden behind a waste treatment plant and a desert vineyard. If it weren’t for the rows of barbed wire fences, it could be almost anything: a military base, a corporate distribution center, etc. Intentional or not, it has the effect of minimizing the presence of Kern’s roughly 3,500 inmates, most of whom live in the facility’s maximum-security unit.

But inside, past the prison’s dozen-odd checkpoints, something unusual is taking place. A group of entrepreneurially-minded inmates is pitching a panel of experienced business owners, and they’ve prepared well for the task. Even though many have years to go before qualifying for parole, they’ve developed ideas for apps, food services companies, and even marketing agencies. One inmate, a convicted drug trafficker with no engineering background, has designed a water pressurization system that turns a sink into an overhead shower.

It doesn’t look like a typical afternoon in a state prison. Actually, it looks a little like “Shark Tank.”

Known as entrepreneurs-in-training, or EITs, these inmates are completing a program conceived by Defy Ventures, a national nonprofit that works with prisoners to build professional skills and prepare them for life post-release. In 2018, it reached over 3,000 inmates in 22 prisons, and its approach is working: Defy graduates have a 7.2 percent one-year recidivism rate, compared to the 30.4 percent national average. 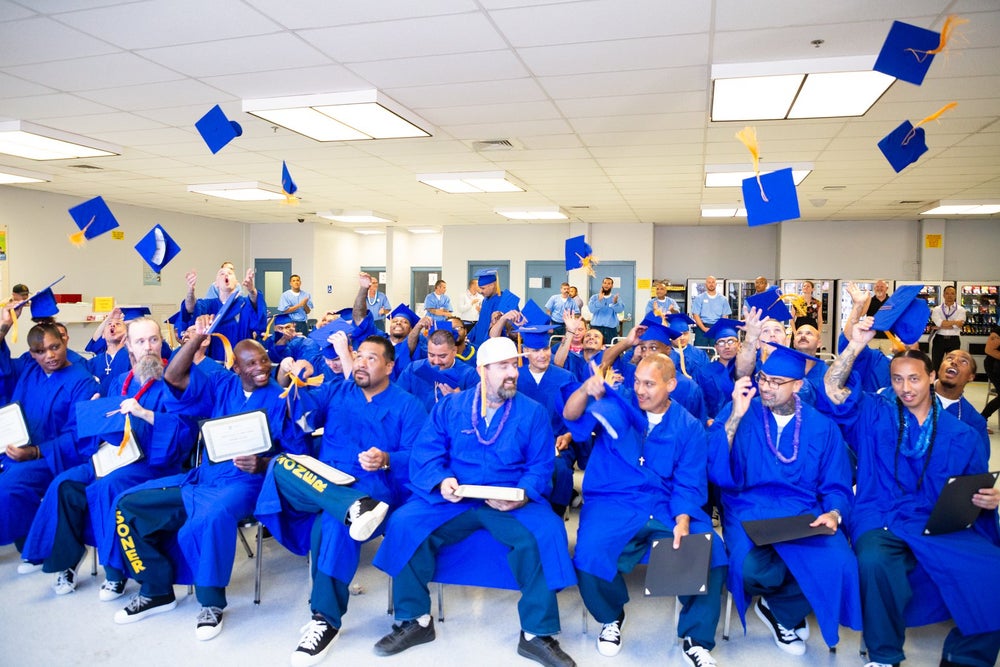 “What attracts a lot of people to the program is the thought of entrepreneurship,” says Tom Shieh, a member of Defy’s advisory board and CEO of background screening provider Crimcheck. “For many of them, we’re just transforming what they did from the world of illicit or illegal activities to legitimate enterprises. But an even bigger part of it is allowing them to develop skills like interviewing, writing resumes, and presenting their story in an empowering way.”

Your New Life, the organization’s flagship program, includes an intensive, hundred-hour curriculum, pairing self-directed work with opportunities to present ideas to university professors, business leaders, and entrepreneurs. One of those entrepreneurs is Steve Sims, a bestselling author, speaker, and founder of the luxury concierge service, Bluefish, who routinely brings groups of entrepreneurs to Kern to work with EITs. 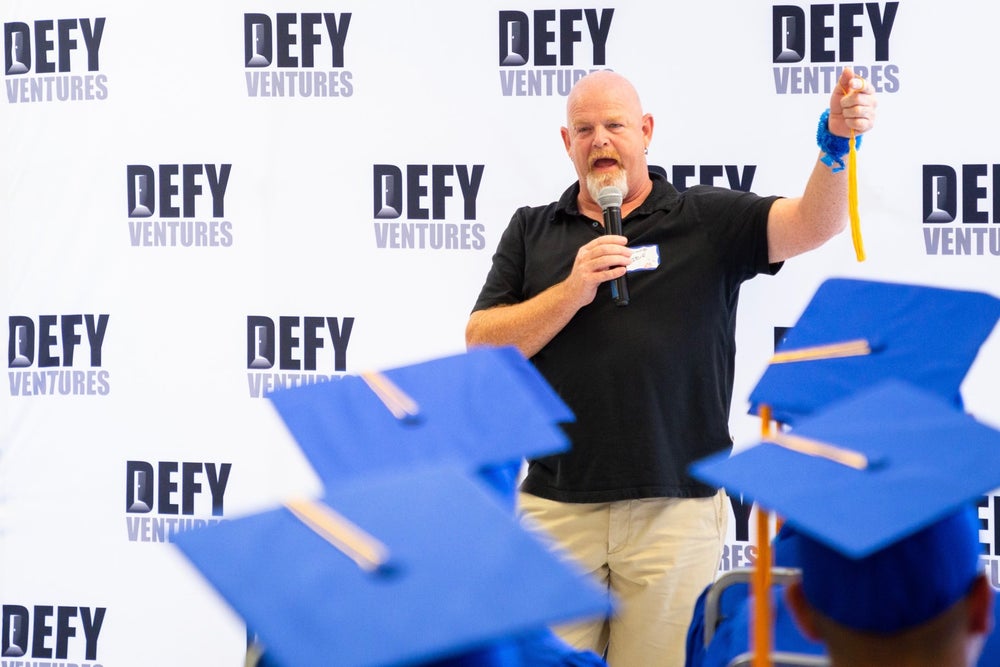 Each session covers a different skill set, from the initial moment of conceptualization to securing funding and running a marketing campaign. Ultimately, the EITs will compete in a pitch contest — the pivotal “Shark Tank”-style moment — for a grant of up to $500 to begin building their business upon release.

“We’re asking them, ‘What problem are you solving? Why do you think you could be able to do it?’” says Sims. “We’re looking for where their passion lies, where their knowledge lies, and what they feel they can bring to the outside world that would generate an income for them and their future families.”

The healing power of hustle.

A few of the program’s graduates have found life-changing success. Quan Huynh, who spent 16 years in California’s Solano State Prison following a second-degree murder charge, launched a janitorial services company shortly after making parole in 2015. A few years later, the business has seven employees, five of whom have also been incarcerated — Huynh’s best workers, he says. Now managing Defy’s post-release program in Southern California, he describes the organization as building on a larger perception shift that he experienced in prison. 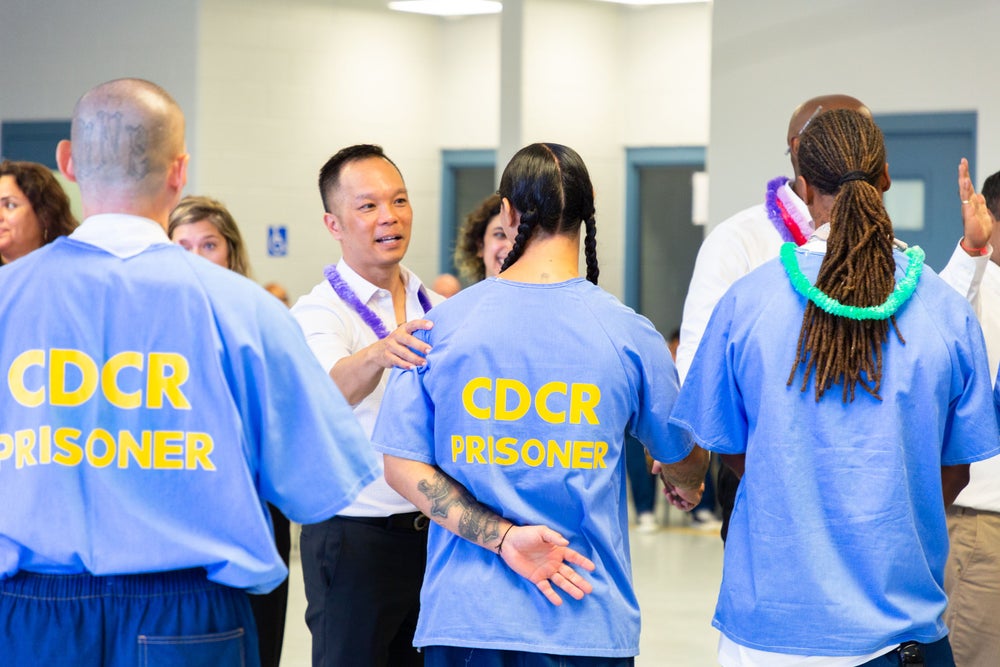 “I felt so connected with other humans, and it became a place where I searched for ways to make myself a better person,” says Huynh. “Then Defy came in, and it was perfectly complementary to everything I was searching for. The idea of transforming your hustle resonated with me on such a deep level, and I just trusted the program.”

The mentors working with EITs often experience a change of perception as well. Jeweliet Tangen, a San Diego-based business coach and philanthropist who joined Sims on a recent visit to Kern, experienced a profound feeling of empathy after meeting two inmates serving sentences for sex crimes. As a survivor of sexual abuse who is preparing to launch a nonprofit fighting child trafficking, Tangen initially had an acrid sense of revulsion. But as she listened to them speak, the way she saw them began to shift slowly. 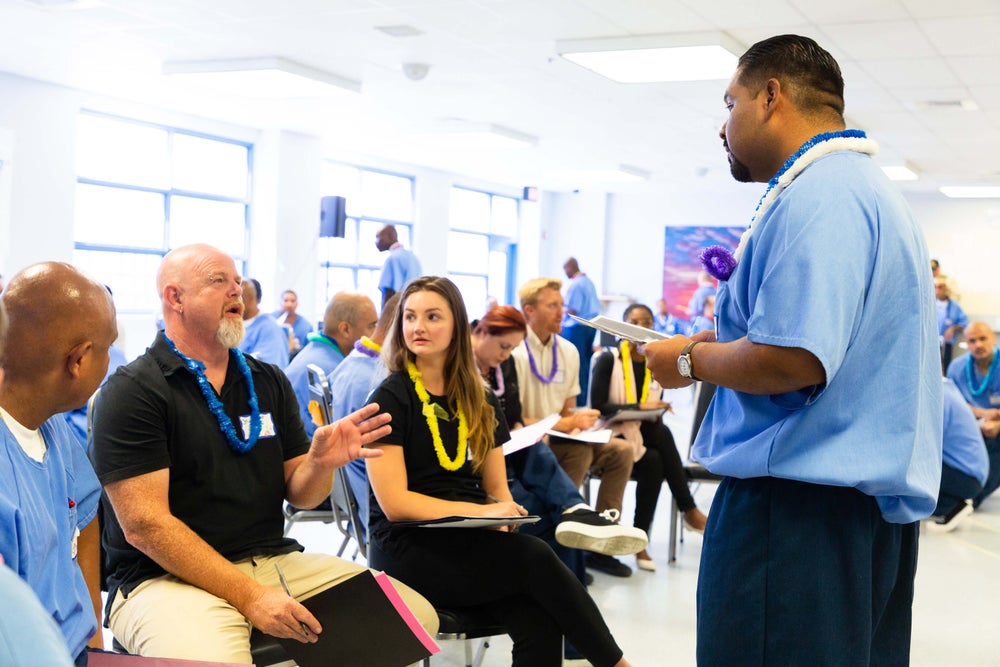 “I don’t think that every person who does what these men have done to women feel remorse, but these guys did,” says Tangen. “It was incredibly freeing for me emotionally. You might think someone doesn’t deserve forgiveness or that they’re just horrible people. But everybody deserves compassion — that’s what this experience has really taught me.”

Not every inmate who participates in Defy’s programs will go on to launch their own business. Some will remain in prison for years to come, while others will inevitably struggle upon reentry to the outside world. But with 2.3 million people incarcerated by the U.S. criminal justice system, organizations like Defy provide one quality that’s in woefully short supply: hope.

“It’s amazing to see their resilience, the sense of heart, and motivation,” says Shieh. “There’s a real drive and hunger to create something new within them.”